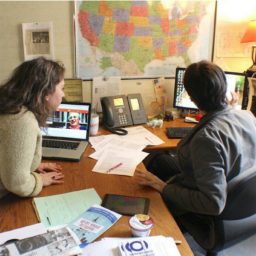 What is one thing about your work that most people don't know?

Radio people can spend as much time talking about the quality of the human voice as any chef can talk about food or taxi driver can talk about the city. The pacing, the pauses, the texture, laughter, evasiveness. What Studs Terkel called "the feeling tone." We also ask ourselves a lot how to help people sound more like themselves and less like what they think someone in the media should sound like. It's an odd endeavor. Also, people think radio waves are sound waves. But they're not! They're electromagnetic waves. And they travel faster than sound. And travel on forever into outer space. What does that mean? The science of it makes me dizzy! When I went to my son's kindergarten class to talk about radio, they were way more interested in that stuff than anything else about radio stations. The sheer science fiction quality of communication with invisible waves... It's easy to forget that a century ago, almost no one would have imagined it.

What makes you most proud of the work you do?

Work is a kind of theater where every day we arrive, burdened or buoyed by the rest of life, and try to put on a show that somehow enacts the kind of society and world we want to live in. Some days it's exhilarating, comic, adventurous. Other days it's theater of the absurd or Greek tragedy. Working at a cultural radio network and on Studs Turkel's radio archive, we get to fight to make space for ideas and traditions we care about and think about the future, which is energizing. But the basic struggle each day is the same as most jobs: we have to perform a bit for one another and the outside world, remind each other why we're there and try to invent a slightly new story about why what we do matters.